A tribute to the American volunteer pilots who joined the RAF to fight against Germany’s Luftwaffe before America’s entry into the Second World War.
Spitfire Vbs of 71 Squadron are returning to their base at North Weald in November 1941 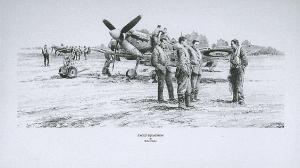 Be the first to review “Eagle Force” Cancel reply