On November 30th 1917, Lieutenant Andrew McKeever, a Canadian serving with 11 Squadron RFC and accompanied by his observer/gunner Lieutenant Leslie Powell in a Bristol F.2b fighter engage in a dogfight over Cambrai with 7 Albatross D.V. Scouts. On this occasion, McKeever achieved 4 of his 31 victories. 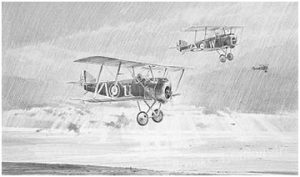 Be the first to review “The Biff Boys” Cancel reply